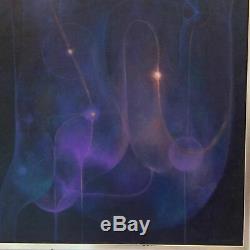 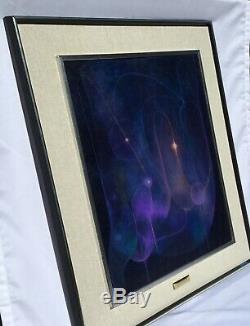 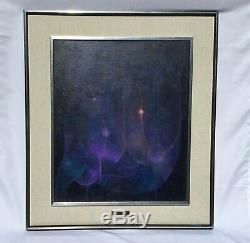 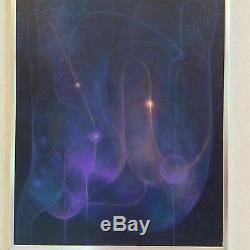 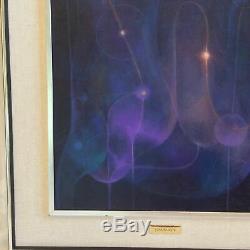 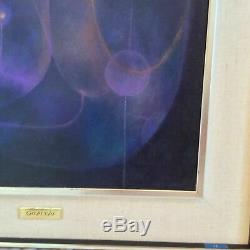 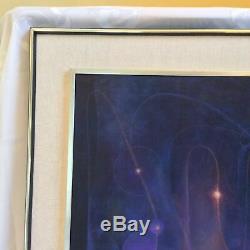 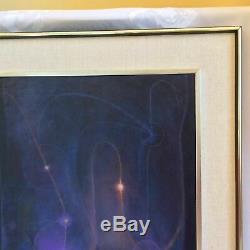 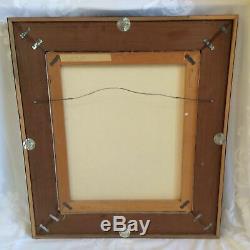 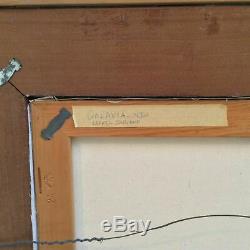 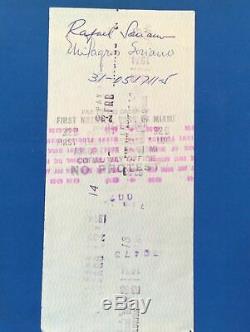 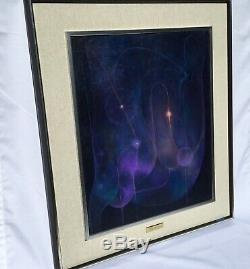 (born Cuba 1920- died 2015 United States). The picture and frame ooze mid century modern. This piece looks fabulous hung especially with a tinge of lighting to show off the brilliance and the depth of color. It is truly amazing and mesmerizing. Bought in 1974 directly from the artist himself framed as you see it today. This piece titled "Galaxia" is a real beauty! It is a fantastic example of Soriano's mystical imagery from his mature period. A quiet serene space is offered by the artist with his dance of blues and golds, light and dark, shade and shine. His brilliant brush work comes together in such a way as to make the viewer feel as if one is gazing upon an awe inspiring singular view of the universe. Rafael Soriano is one of the major Latin American artists of his generation of modernists, and one of the premier painters of Cuba.

Soriano first mastered geometric abstraction as a style in the 1950's, but by the late 1960's had defined his signature approach to painting. His work embodies a style best described as. Purely abstract form of light, form, space and shadow with an interest in poetic and metaphysical impulses. PROVENANCE: It has been part of my family since 1974. My mom still has the cancelled check my dad made out to the artist himself on June 8, 1974.

Rafael Soriano's signature along with his wife Milagros Soriano's are on the back of the check. My father's signature is on the front. We have been the sole owners.

Friends of my family hosted an event in their home and the artist came up to Chicago from Miami, along with a his wife and daughter, and presented his works in their home. This painting was one of them.

The blue embossed sticker no. 12 is still on the bottom right corner that he either placed on the painting specifically for that event or from another showing. Igned by the artist in the bottom right corner. The back side says Galaxia Oleo Rafael Soriano on a piece of tape presumably hand written by him. This was the first real "painting" that my parents owned. I remember the day they brought it home. They were quite pleased with it.

The painting has hung on our living room wall ever since. The frame work is perfect for this painting! (inner frame depth) / 28. No cuts, wrinkling, stains or fading as far as I can tell.

Lways been shielded away from direct sunlight. The painting was professionally cleaned about 8 years ago.

Wear only to the frame. The silver edge of the frame inner border has a few tiny areas where the silver is scuffed /missing but this can be easily repaired or leave as is. Non smokin, Never hung in direct sunlight. We may need time to obtain quotes and arrange scheduling. Soriano was a global figure in the twentieth-century art world; his work resonated with international artists of Latin American origin like Roberto Matta, Rufino Tamayo, and Wifredo Lam.

Born in 1920 in the town of Cidra in the province of Matanzas, Cuba. Havanas prestigious Escuela Nacional de Bellas Artes San Alejandro, 1943 as Professor of Painting, Drawing and Sculpture. He was one of the founders, and later Director, of the Escuela de Bellas Artes de Matanzas, the most important art school in Cuba outside of Havana. During this time, he participated with Los Diez Pintores Concretos known for bringing the geometric abstraction movement from Europe and the Americas to Cuba. In 1962 Soriano went into exile, settling in Miami with his wife Milagros and his daughter Hortensia.

He worked as a graphic designer and occasionally taught, and later at the Cuban Cultural Program of the University of Miami. He died in 2015 in Miami. His work proceeded along the paths of geometric abstraction in the 1950s, but by the late 1960s, Sorianos work took a radical turn. His brush began to create amazing shapes; abstract expressions related to the emotions, feelings, meditations and mystical introspections. A novel treatment of light and color, transparencies and forms placed Soriano in a new aesthetic dimension.

He became a master of luminosity, of the pictorial metaphor and of the metaphysical language of forms. In his amazing and highly complex images, light acts as both form and content. It is this unity of purpose and means of representation that constitutes Sorianos transcendental contribution to contemporary visual discourse and elevates his artistic creation to universal rank noted by many scholars. Rafael Sorianos work has been represented in numerous individual exhibitions and over 200 collective shows and private and public collections.

The item "Vintage Cuban oil painting Rafael Soriano abstract artist Cuba Latin America art" is in sale since Friday, September 15, 2017. This item is in the category "Art\Paintings". The seller is "dmac5138" and is located in Chicago, Illinois. This item can be shipped worldwide.